Skip to content
Date: 22/07/2017Author: queensofthedarkside 0 Comments
KAYOS: The Bad & The Worse
By Tracy A. Ball

Lareina Elliot discovered her idea for making students loyal to the government is being implemented to further the war. It has become her life’s work to undermine that effort.

Agent Christian Deverell promised to protect Lareina, always. But that was before he flipped sides, before their history got dirty, before he commissioned her adopted brother to assassinate her.

Cpl. Silas McKade never misses. He has a death warrant for Lareina—the woman who means everything to him— and a soul full of hatred for Christian—- the man he wants to be. He’s either going to break Lareina’s heart or stop it altogether. 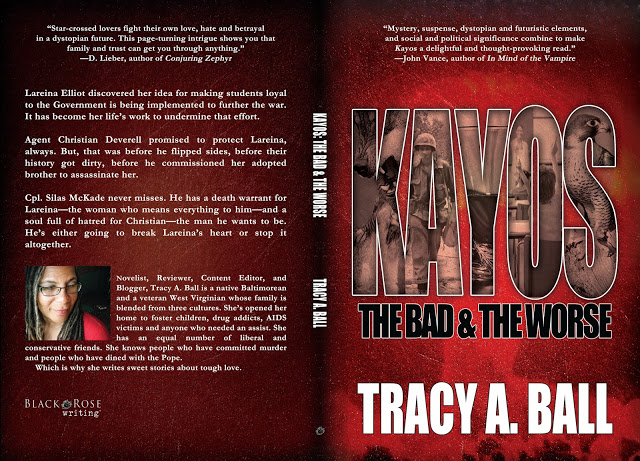 #1
There was no mistaking the resolution in her tone. “If you want to shoot me, you’ll have to do it in the back.”
He leveled her a mean look.
“Mr. Deverell, sir.” An officer came into view. Two others followed him escorting Jericho Parks.
“That’s her!” Jericho pointed. “That’s her! She did it. She’s responsible. I want to press full charges! She was behind it all!”
His outburst made up Christian’s mind. He raised his weapon and unloaded three caps. Like dominoes, the DoP’s went down one after the other. Jericho screamed. He fell to his knees and covered his head. Christian studied Lareina. “Three days.”
He watched her eyes dart to the left in that telltale manner.
“I need at least a week.” Urgency caused her voice to rise.
“You’re only getting three days.” He was in no mood to bend. Three soldiers lay dead. He had compromised enough.
“Fine. I’ve got to go.”
One hand extended, gun still pointed toward Jericho, in the event he attempted to run, with his other, Christian grabbed Lareina’s arm, pulling her to him. He put every ounce of his frustration into his kiss. It was either that or break her neck. And he was strongly contemplating the latter.
Lareina allowed it. She wanted, craved his touch as much as he craved hers. Theirs was a dance with the devil; irresistible and impossible. The tangles had become knots and he only gave her three days. It wasn’t enough. She could hardly wait.
The kiss ended, but the intensity remained. He sighed, letting the heat recede.
She whispered, “I have a pretty long to-do list, Christian. Unfortunately, you’re not on it.”
He licked the corner of her mouth, matching her tone. “I am the list.”
She pressed her cheek against his lips. “Well, you’re not getting done tonight.”

#2
“I don’t want you in jeopardy. Is that so hard for you to understand?”
“We’re in a war. I’m a criminal. Is that so hard for you to understand? We’re fresh out of those bubbles you like to put me in.”
“You don’t have to help them hurt you, Lareina. You don’t.”
“No. I can get to them first.”
“That’s what I’m for.”
“I know.”
There was nothing to say to that. They were silent.
Silas knocked once and let himself in. If he cared what they thought of his intrusion, it didn’t show. “I’m here to interrupt your little powwow.” He directed his conversation to Christian. “I know you’re a big man, all scary and shit. But that don’t mean a damned thing around here.” He slapped two pills down on Lareina’s nightstand. “Your antidote. You better take it within the hour.” He ignored her raised eyebrows, keeping his focus on Christian. “You’ll need one of those every night for at least a week. Here are your choices…You can be a part of the solution, or you can wake up and start chasing us again. But I have to say you really are shit at it. You ain’t that hard to elude. So give it a good think.” He turned to leave.
“Silas!” Lareina wanted to laugh. She sooo wanted to laugh. She put a restraining hand on Christian. “You drugged us?”
Silas glanced back, unrepentive. “My way is effective, decisive and keeps you out of the mix. You can’t think straight with him around, anyway. Maybe you need to be asleep.”
“Boy, I’m going to beat the snot out of you.” Her uncontrolled grin nixed the threat.
“When I’m in the market for a mosquito bite, I’ll let you know.” He let himself out.
Silas was Silas. Lareina knew that when she collected him. She created him. Damn, he was good.
Christian was another matter altogether. He hadn’t said a word. That was never a good thing. “Christian?”
It took a minute before he responded. When he did, it was devoid of emotion. He snapped his eyes at her, deeply sincere with his intent. “You might want to start getting unattached and resign yourself to knowing I’m going to kill him. I’m informing you now, so when it happens you will be able to recall I warned you.”
Lareina felt a chill.

#3
Yukiyo surveyed the room. “Why would you get a room with one only bed?”
“Would you prefer to lose your virginity in the car?”
She failed at not smiling. “You’re an asshole. I’m not sleeping with you. And, for your information, I’m not a virgin.”
“The hell you ain’t.” He moved faster than she expected. Tackling her, he forced her to the bed and covered her body with his, using just enough of his weight to keep her pinned. “You’re smart, you’re sexy, you’re dangerous, and you impress the hell out of me.” He reached his hand between them to unbutton her pants.
“Get off.” She resisted by squirming once. “That’s not what you think.”
“You’re the liar in this relationship, not me.” He undid her zipper and slid his hand inside. “You chose me. You defended me. Don’t you think I owe you for that?” He slow stroked her, loving that even as her body went soft and she moved against his hand, she kept her eyes open, fixed on his.

Author Bio:
Novelist, Reviewer, Content Editor, Blogger, T-shirt Wearer, and Professional Snacker; Tracy A. Ball is a native Baltimorean and a veteran West Virginian whose family is blended from three cultures. She has opened her home to foster children, drug addicts, AIDS victims and anyone who needed an assist. She has an equal number of conservative and liberal friends. She knows people who have committed murder and people who have dined with the Pope.
Which is why she writes sweet stories about tough love.